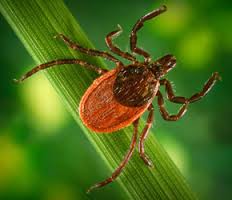 Since Lyme Disease is a multi-systemic illness, there are a wide variety of possible symptoms. These symptoms may vary from mild to severe, and they may come and go. It may be helpful for your physician if you photograph your rash (if you get one) and log all symptoms on a daily calendar. The longer the disease remains undetected, the more difficult it is to treat. Since early detection and treatment is critical, seek medical advice as soon as possible.

Other Tick-borne DiseasesThe same tick that transmits Lyme Disease, may transmit other diseases at the same time. Research indicates that it takes 24 to 36 hours after attachment to transmit Lyme Disease BUTother diseases can be transmitted in less time.
Co-infection with two or three tick-borne diseases may complicate diagnosis, increase severity of symptoms, and prolong illness.

Several different Ehrlichia bacteria exist but the one associated with the black-legged deer tick is called Human Granulocytic Ehrlichiosis, HGE.

Anaplasmosis can most commonly cause high fever, chills, sweating, sever headaches and muscle aches. Fatigue and gastrointestinal complaints may include nausea, vomiting and diarrhea. The illness may vary from mild to severe to life-threatening. Effective antibiotics eradicate the infection and fewer problems develop with earlier treatment. Other pre-existing conditions may worsen the course of action.

Babesiosis is an infection caused by a malaria-like protozoan. The disease usually begins with non-specific, flu-like symptoms 1-3 weeks after a black-legged deer tick bite. Symptoms often include spiking fevers and chills. The disease may result in anemia-causing fatigue and poor exercise tolerance. The infection may be asymptomatic to mild in the young. It can be severe and even life-threatening in patients without spleens, immune-compromised patients, and older patients with pre-existing medical conditions. Fewer complications occur with early treatment and effective antibiotics.

﻿© 2023 Torrington Area Health District. All Rights Reserved.
The Torrington Area Health District is an equal opportunity provider, and employer.  If you wish to file a Civil Rights program complaint of discrimination, complete the USDA Program Discrimination Complaint Form found online at http://www.ascr.usda.gov/complaint_filing_cust.html , or at any USDA office, or call (866) 632-9992 to request the form.  You may also write a letter containing all of the information requested in the form.  Send your completed complaint form or letter to us by mail at U.S. Department of Agriculture, Director, Office of Adjudication, 1400 Independence Avenue, S.W., Washington, D.C. 20250-9410, by fax (202) 690-7442 or email at program.intake@USDA.gov.